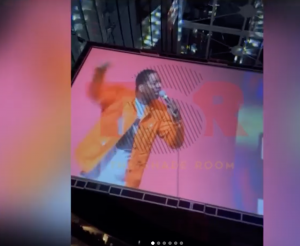 While Tony Rock has been subliminally addressing the battery committed by Will Smith against his brother Chris Rock on Twitter, he made his feelings loud and clear during his recent comedy show.

In footage obtained by The Shade Room, Tony Rock addressed Will Smith’s slap at the 2022 Oscars during his recent comedy show.

“If you think you gonna to walk up on this stage, this ain’t the motherf***king Oscars! And if you walk your ass up here, you ain’t nominated for s*** but these mother****ing hands! Oh, we going to pop the rest of the year, n****. Every time you see me do a show, pop!”

While people believe Tony Rock’s words may be justified, Tony Rock needs to be careful moving forward when it comes to opening himself up to potential criminal liability, including charges of criminal threats. While people have the right to freedom of Speech under the First Amendment to the Constitution of the United States, that right does not apply to threatening other people with violence and putting them in fear for their safety.

Under California Penal Code Section 422 PC, it is illegal to make criminal threats. This offense involves any threats of violence or harm.

To prove that the defendant is guilty of this crime, the People (the District Attorney and the State of California) must prove that:

If you or a loved one is facing criminal charges in court, you need the criminal defense lawyers at ALL Trial Lawyers by your side. The attorneys at ALL Trial Lawyers are trial attorneys with years of experience. They know the law, and they’re not afraid to take your case to trial. In addition, they have a strong reputation among judges and prosecutors throughout Southern California, which has delivered tremendous victories for their clients. Our ultimate goal is to deliver the best results that can be achieved in your case— whether that be the way of outright dismissal, a favorable plea bargain deal, or an acquittal of the charges at trial. With ALL Trial Lawyers by your side, you can rest assured that the criminal team will be giving you their all.