4 Reasons To Never Speak To The Police Without A Lawyer 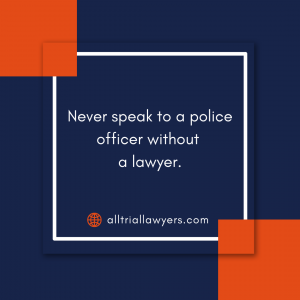 Four Reasons To Never Speak To The Police Without A Lawyer

Dealing with police officers can be terrifying. We often feel like we need to answer all of an officer’s questions because we want to prove that we didn’t do anything wrong. However, with the high number of wrongfully convicted people, it’s clear that talking to a police officer without an attorney has grave consequences. Here are five reasons you should NEVER speak to the police without having an experienced attorney present.

1. You Have a Constitutional Right to Remain Silent

The United States Constitution gives you the right to remain silent under the Fifth Amendment. It states that no person “shall be compelled in any criminal case to be a witness against himself.” So what exactly does that mean? First, and most importantly, the government and the district attorneys cannot force you to testify at your own criminal trial. While you have the right to testify, and you may choose to do so, the law protects you and affords you that choice.

Second, the right to remain silent also means that you do not have to answer questions from police officers related to the investigation of a possible crime. You do not have to say ANYTHING. This right applies whether or not you are in police custody or under arrest.

Another critical element of the right to remain silent is the ability to stop answering questions once you’ve started speaking to officers. Let’s say you do initially decide to talk with the police and answer some questions. If you start to become uncomfortable at any time during the interrogation, you are free to invoke your Fifth Amendment rights and stop talking so you can speak with an attorney first.

2. You Always Have the Right to Have an Attorney Present During an Interrogation.

The United States Constitution gives you the right to consult with an attorney before speaking with the police under the Sixth Amendment. The Sixth Amendment provides that in all criminal prosecutions, the accused has the “right to the assistance of counsel for his defense.”

People may be afraid to ask for an attorney because it makes them “look guilty.” Some police officers may even insinuate that you should be able to speak to them if you have nothing to hide. But think about it like this – if the police are questioning you, they believe you are guilty of something. And even if you think you’re helping yourself, there’s almost a guarantee that you’re digging yourself into a bigger hole, and you don’t know it yet. So remember: Everything you say can and will be used against you.

3. The Police Can Lie to You–But You Can’t Lie to the police.

4. The Police Will Never Help You. Ever.

If you or a loved one is facing criminal charges in court, you need the criminal defense lawyers at ALL Trial Lawyers by your side. The attorneys at ALL Trial Lawyers are trial attorneys with years of experience. They know the law, and they’re not afraid to take your case to trial. In addition, they have a strong reputation among judges and prosecutors throughout Southern California, which has delivered tremendous victories for their clients. Our ultimate goal is to deliver the best results that can be achieved in your case— whether that be way of outright dismissal, a favorable plea bargain deal, or an acquittal of the charges at trial. With ALL Trial Lawyers by your side, you can rest assured that the criminal team will be giving you their all.