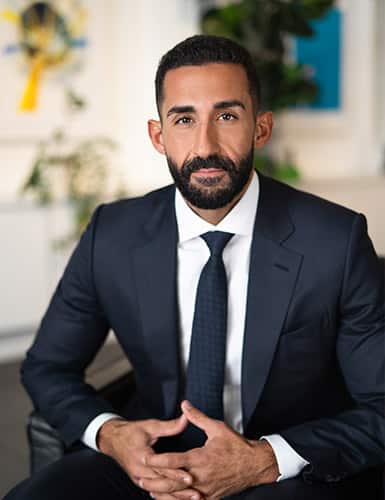 Attorney Mohammad Abuershaid is the founding partner of ALL Trial Lawyers. He is the lead attorney handling the firm’s juvenile dependency practice (CPS defense). He has counseled and represented hundreds of parents against Child Protective Services (CPS), Department of Children and Family Services (DCFS), and other social service agency investigations. Attorney Abuershaid has fought for and protected parents in juvenile dependency cases in numerous counties in Southern California, including but not limited to, Orange County, San Bernardino, Los Angeles, and Riverside.  Mohammad Abuershaid is highly equipped to handle juvenile dependency cases of all severities, including cases involving allegations of general neglect or negligence, failure to protect, severe physical abuse, positive toxicology results in infants, sexual abuse, fractures or broken bones, head injuries, and trauma.

There are two sides to every story and Attorney Mohammad Abuershaid will make sure your side is heard. He has witnessed many times that investigative agencies, such as CPS and DCFS, do not accurately represent the true facts of a case. This bias and slanted reporting by CPS and/or DCFS will always be to the detriment of the alleged offending parents. Ultimately, the parental rights of the alleged offending parents are violated. Understanding how incredibly important and precious children are to their parents, Attorney Abuershaid relies on his extensive experience and expertise to zealously fight to reunite families. He is driven and focused on protecting your parental rights against CPS and DCFS.

In addition to his juvenile dependency practice, Attorney Mohammad Abuershaid is equally well versed in representing people accused of committing felony and misdemeanor crimes. He has over 20+ jury trial and bench trial experience under his belt. He has delivered a great number of victories to so many of his clients in the form of favorable settlements, dismissals, and acquittals. He has represented numerous high-profile clients, including the family of the San Bernardino shooters. Prior to forming ALL Trial Lawyers, Attorney Abuershaid was a pubic defender at the Orange County Public Defender’s Office, where he represented thousands of indigent clients accused of committing various crimes of all severities.

“Mohammad Abuershaid saved me and my family from the worst imaginable nightmare! CPS caused us the worst grief and pain we have ever gone through, and he was able to keep us and our children together through the whole process. The accusations and threats were more than we could deal with, but with Mohammad’s help and never ending hard work, he was able to win our case!”