If you or somebody you care about has been injured in a vehicle accident and you expect to receive a settlement or jury verdict in your favor, do you know whether or not the money you get will be taxable? Here, we want to discuss tax issues surrounding auto accident insurance settlements. The reality is that you will not likely have to pay much, if any, taxes on the money you receive if you have been injured in a vehicle accident caused by another driver. Below, we will break down the types of compensation received in these settlements and discuss whether or not they can be taxed.

Looking at the Language from IRS Regulations

There is perhaps no better place to look for information about personal injury settlement tax liabilities than language right from the Internal Revenue Service (IRS). If we look at 26 C.F.R 1., specifically §1.104-1 Compensation for injuries or sickness, we can see that nearly every portion of a personal injury settlement or jury verdict will not be taxable. The IRS says that it does not matter whether or not a person receives compensation through a lump sum amount or through periodic payments – they will generally not be taxed. However, there is an exception to this, which we will discuss below. 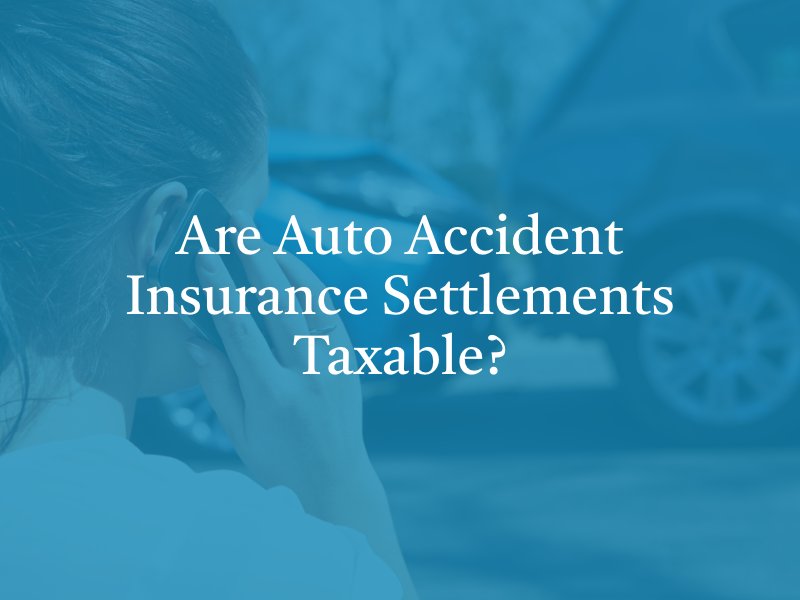 Coverage of medical treatment is typically paid for through an insurance settlement or a jury verdict. In fact, this typically makes up one of the largest portions of a settlement. This is considered a “special damage” meant to compensate a person for any medical expense they incur as a result of their injuries. This is not income. This is an expense an injured individual would otherwise have not had to endure if they had not sustained an injury caused by someone else. This will not be taxable.

Pain and suffering damages are considered “general damages” when it comes to a settlement or jury verdict. In order to receive compensation for pain and suffering types of losses, individuals generally have to have sustained a physical injury. Again, these are expenses a person would not have otherwise had to incur if they had not sustained an injury, and this will not be taxable at either the state or federal level.

Property damage expenses fall under the same special damage umbrella as medical treatment and are meant to help a person repair or replace their vehicle in the aftermath of an accident. Additionally, the cost of any rental vehicle needed in the interim is also included under property damage expenses. Individuals will not be taxed on property damage portions of their settlement or jury verdict.

It is not uncommon for individuals to have to take time away from work after sustaining an injury in a vehicle accident. This is where we will see that a portion of the settlement is taxable by the IRS. Any settlement or judgment amount that a person receives to reimburse them for lost wages is going to be subject to income tax.

The idea behind taxing this portion of a settlement or judgment is that a person is simply receiving wages that they would have otherwise received if they had not sustained an injury. Because this is replacing another type of income, it will be subject to income tax at the same level the person would have been taxed already.

This can get confusing, particularly if the settlement or judgment amount is all lumped together with the other types of damages mentioned above. It is important to differentiate between the amount used to cover lost income so that those who receive the compensation will note that they have to pay taxes on that portion of the settlement or judgment amount.